A warm welcome to Russell Fette! Russ joins CASA as our Promotions Coordinator (aka Schwag Developer, or He-Who-Makes-Cool-Stuff-for-Climbers).

Russell and his family returned to Tucson after several years in Korea and Kansas, and they are so happy to be back near their mountain playgrounds. After years of benefiting from the stewardship of other volunteers while they raised their kids on the trails and crags, Russ and his family are excited to give back to the land and community that has given them so much. ​ 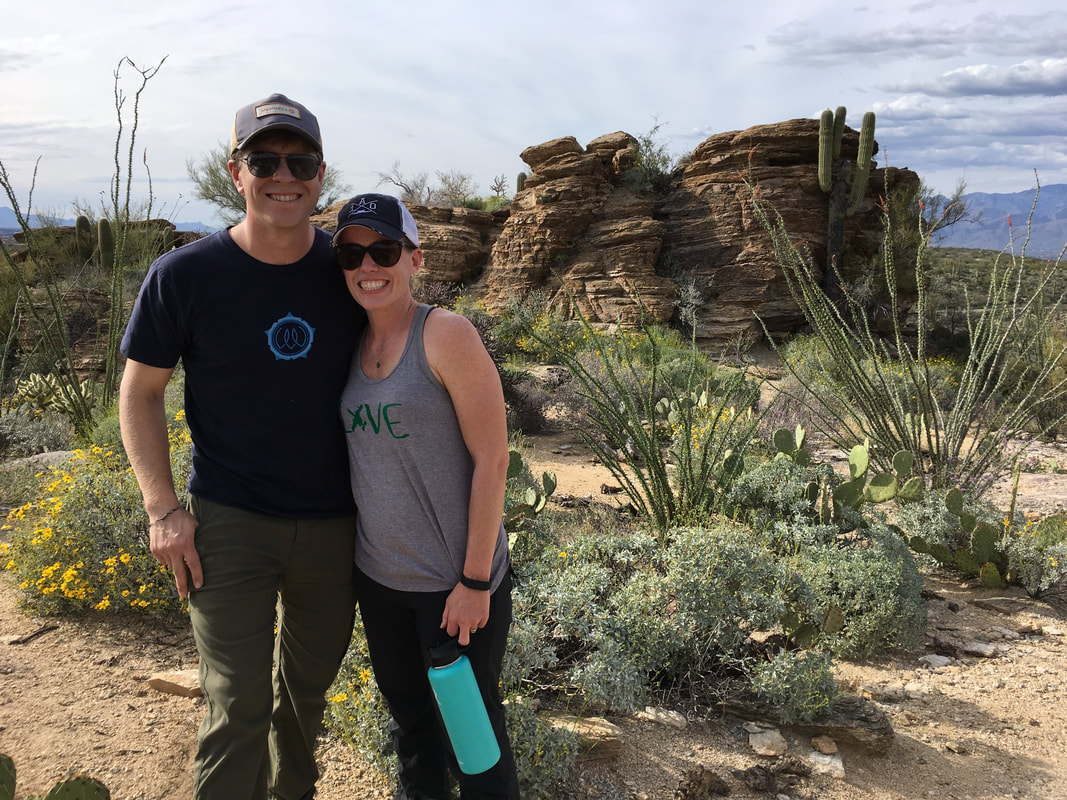 Russ loves almost every activity available outside in southern Arizona, whether cragging, hiking, camping, trail running, or just watching our beautiful sunsets in his backyard. His favorite local adventure to date has been on Baboquivari.

Russ is passionate about protecting and sharing the amazing landscapes of the American West and feels blessed to call it home.

We will be extending the Summer Education series a bit with two more presenters lined up for the fall! Keep an eye on our Facebook page for details.

Story Collection
Brush off those keyboards, ink sketches, rad photos, and climbing journals! Stories from the Drylands III will be launching in 2020. Missing a book? Check out the first two volumes.


Stewardship Team
Mark your calendars for March 2020! We’re psyched to be beefing up our Youth Stewardship Day event. This time around, we’ll be offering a series of pre-training for Youth and Adult Crew Leaders to building confidence and leadership skills. Community service and giving back is more fun on the mountain!

(Tentative) Next Adopt a Crag is October 5 on the Aspen Trail.

Outreach and Community
CASA is proud to continue to co-host Climbing in Color’s exciting POC Meetup at Rocks and Ropes. This summer, climbers of color and allies met together each month to share ropes. Let’s continue to celebrate diversity and inclusivity in our community!

CASA is pleased to announce that our 2018 annual report is complete.  Read or download it below!

CASA is excited to announce that we have reached a cooperative agreement with the Arizona Mountaineering Club, a Phoenix-based climbing education and advocacy group that has been operating since 1964!  We have agreed to share our expertise in stewardship in exchange for learning about their education programs.

The Bighorn Sheep closure ended April 30. See map (p. 3) to review formerly off-limit climbing areas in the Pusch Ridge Wilderness.
​
In Southern Arizona, raptor breeding season is roughly February through July.​  Nesting raptors are protected by law. CASA recognizes that any climbing area may be considered off limits, subject to the conditions. Do your part to be on the right side of the law (and the birds)—and have fun and be safe out there.

March 21, 2019 ​— Good news for climbers and falcons in Cochise Stronghold!

Photo by Jeff Ladderud
The Forest Service has lifted nesting raptor closures in the Stronghold and is trusting climbers to NOT disturb the birds. If climbers choose to disturb nesting raptors, the closures will be reinstated (and likely expanded). Please report nesting raptors on Mountain Project. Educate yourself and others!

After four years of hard work and dedication, Eric Sophiea will be leaving CASA to pursue other challenges. Eric is one of the founders of CASA and was instrumental in its success. He has volunteered thousands of hours to ensure the smooth operation of the organization. In his tenure, he has held a wide variety of positions, from President to Crew Leader, always bringing his insight and dedication to whatever task he was involved in.

All of us at CASA would like to thank Eric for his vast contribution. The southern Arizona climbing community has benefited greatly from his time and vision. We wish Eric all the best in his new adventures.

Eric's work leaves CASA financially and structurally sound, and we will be using his departure as an opportunity for greater community involvement in our leadership. CASA is and has always been an organization dedicated to supporting climbers and creating community—a home for climbers. In the next few months, CASA will be actively recruiting new volunteer staff members to take over some of the functions that Eric has been performing. If you have always considered becoming part of a fun and vibrant organization, this is your chance.

Thank you, Eric, and may you find success on your new path. 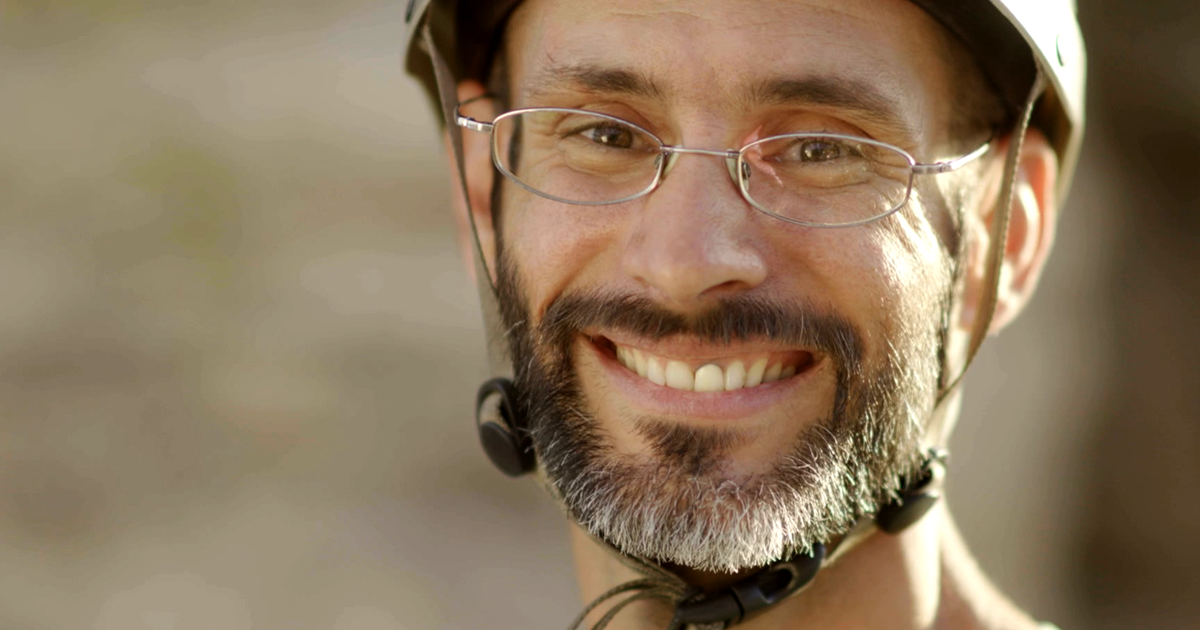 ​No one should have to untie up high! The A-Team is now also adding quick-lower systems to existing climbs. Top-rope or lower on your own gear, then the last person for the day clips the fixed ‘biners and gets a free ride down.

The Forest Service has chosen not to include Windy Point Vista parking as a new fee area on Mt. Lemmon! CASA is still working with them to also keep the current free parking at Gordon Hirabayashi, another proposed fee area.

​CASA and the Wilderness Society have been working with the Forest Service to help make sure that climbing at the Dry is not impacted by the Recommended Wilderness designation. Things are looking good for us right now!

​Snag a copy of our CASA Anthologies at Summit Hut, Rocks & Ropes, the BLOC, Antigone Books, or online.

Thanks for celebrating three years with us! It was great to see a big crowd at Borderlands Brewing for CASA’s anniversary party.

Pooped at Beanfest in the last few years? CASA will be providing portable toilets again to help you leave no trace of beans in the Stronghold.

That climber on the home page of our website? Yeah, him. Shout-out to Brian Rasmussen for stepping up to lead our efforts against graffiti on our mountain. Thanks, Brian!

CASA's Adopt a Crag 14 at The Homestead (Dec 2) was a huge success! 45 volunteers from Phoenix, Tucson, and beyond put their muscle into taking care of this shared crag. Crews led by the Access Fund and CASA volunteers built staircases to help reduce erosion, re-routed eroded climber trails, expanded a parking area near the trails, and more!​​

What a fantastic turnout to our Anthology 2 book launch! So many great people and stories gathered at Ermanos. Thanks to all who made the night special. Get the box set directly from CASA—or visit Rocks & Ropes,The BLOC, Summit Hut, or Amazon for this or last year’s!

Looking for someone to speak to your team about CASA’s work in the community? We’d love to tailor a presentation to meet your specific needs and interests! Email Executive Director Kristyn Conner to schedule.

August 2017 — CASA's President, Eric Sophiea, wins the Cox Conserves Heroes Award! Thanks to everyone who voted! 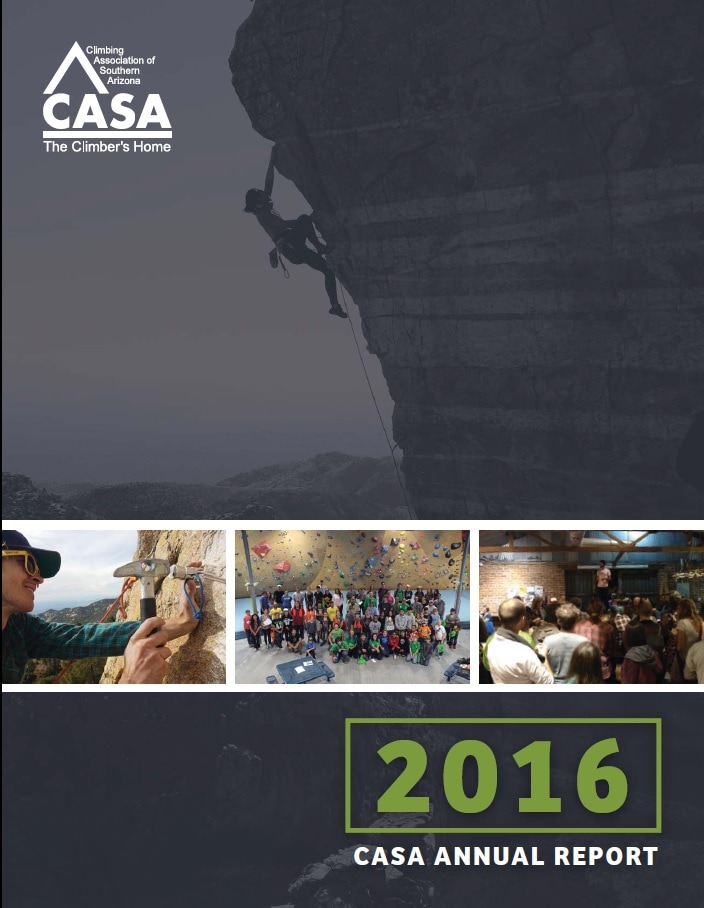 Double your impact
Donations in April are being matched by Rocks & Ropes, The BLOC, and Tim Richardson of Habitation Realty (up to $3000)! It's a great time to sign up or renew. Your membership will score you the new 2017 design t-shirt and a bunch of new member discounts around town and online!

Don't miss out on an opportunity to learn about Desert Savvy Climbing. Participate in our April 1st Conscious Climber Impact course! Thanks to Joe Cleinmark for teaching and Geir Hundal for the Education Team leadership.

See you April 2nd for a quick litter cleanup day along Mt. Lemmon Highway. Meet at the BLOC at 9:00! 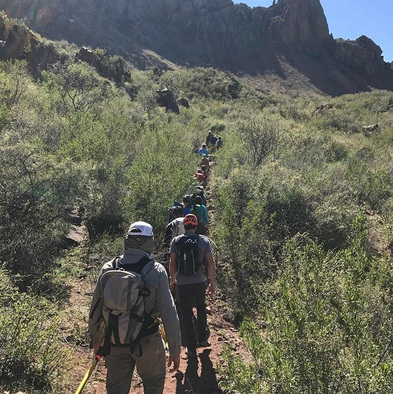 On Saturday, Feb 25th, CASA hosted the first ever Adopt a Crag at Baboquivari Peak.

41 volunteers showed up for this incredibly successful event. Multiple people and organizations worked hard to make this day a reality

Baboquivari Peak has a powerful significance to many and especially to the Tohono O'odham people. It was both an honor and a privilege to give back to this special place.

This Adopt a Crag would not have been possible without the hard work of the following people and organizations:

And most important, thank YOU: All you volunteers who donated your time, energy, and sweat to help make the world a little better.

Results of our work on the Baboquivari Access Trail:

If you missed this event please consider coming out for our Adopt a Crag 10: Mt Lemmon Highway Cleanup, April 2. More details soon.

Thanks for supporting CASA and stewardship! 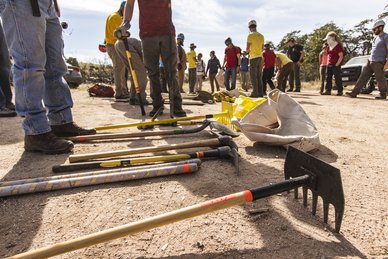 CASA (Climbing Association of Southern Arizona) is excited to announce that we have received a sizable grant from the Arizona State Parks Recreational Trail Program!

The grant is to be used in the Santa Catalina Ranger District on 21 miles of established trails. CASA will be partnering with the Arizona Conservation Corps, the Forest Service, and the Arizona Trail Association to perform maintenance work on trails that access climbing areas in the Catalinas. The work will also benefit all other users of these trails including mountain bikers, equestrians, and hikers.

​Additionally the grant will be used to provide workshops for volunteers from all user groups to help create a larger base of skilled volunteers. The $73,000 grant monies will be used to pay for Conservation Corps trail crews, program coordination, signs, educational materials and other project expenses

This work will be executed over approximately the next 12 to 18 months. There is currently a publicly listed Request For Proposal (RFP) to execute and implement the work. 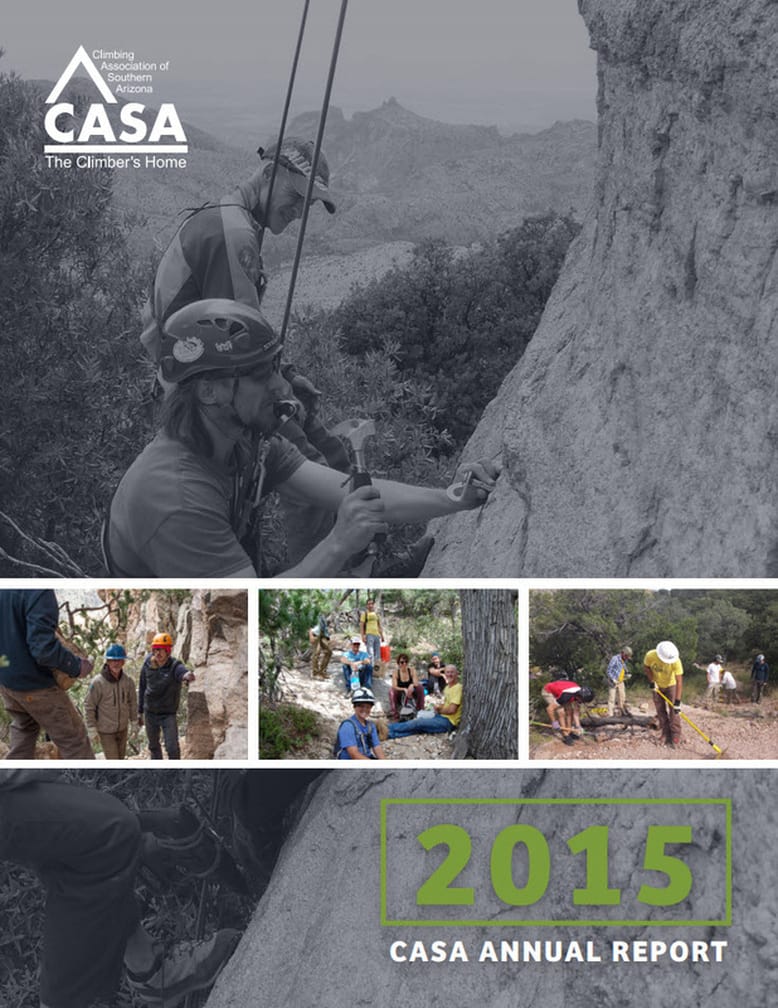 In partnership with the Arizona Wilderness Coalition, the U.S. Forest Service, and Dragoon Brewing Co.... Ladies and gents. Adopt a Crag 5.

A GIGANTIC thank you from CASA to all of you! We can't make our climbing areas better without your help. ‪#‎leavenotrace‬ ‪#‎adoptacrag‬ ‪#‎stewardship‬Access Fund 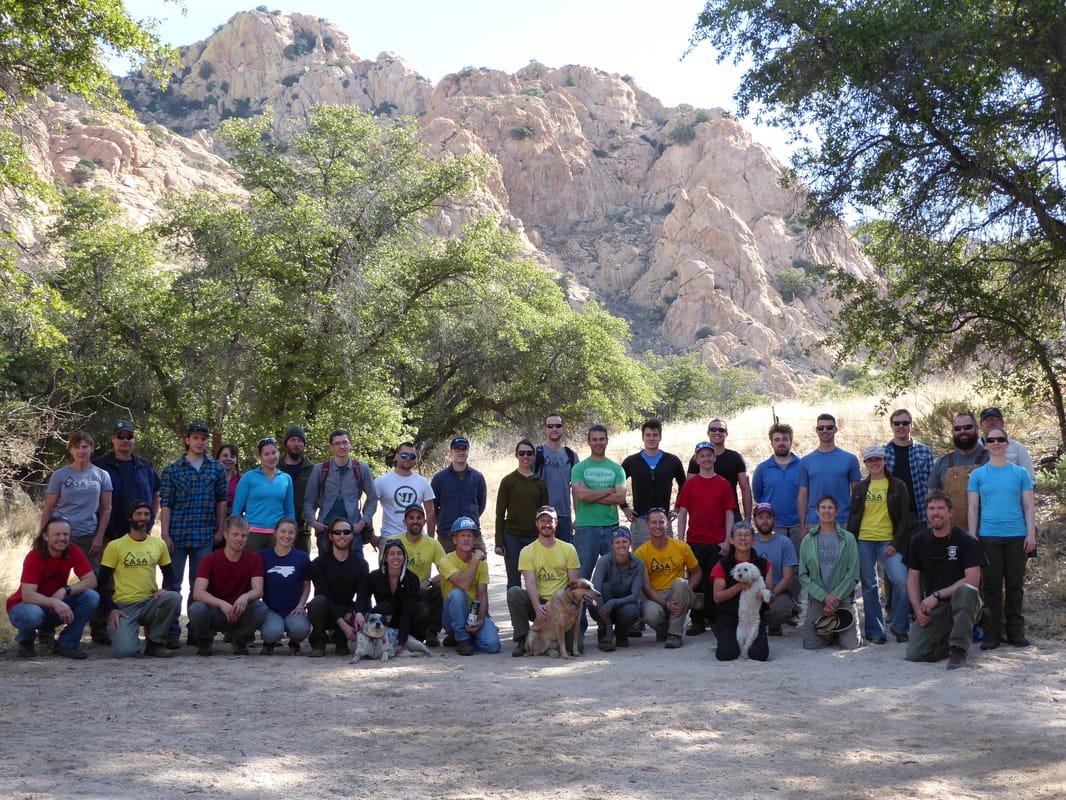 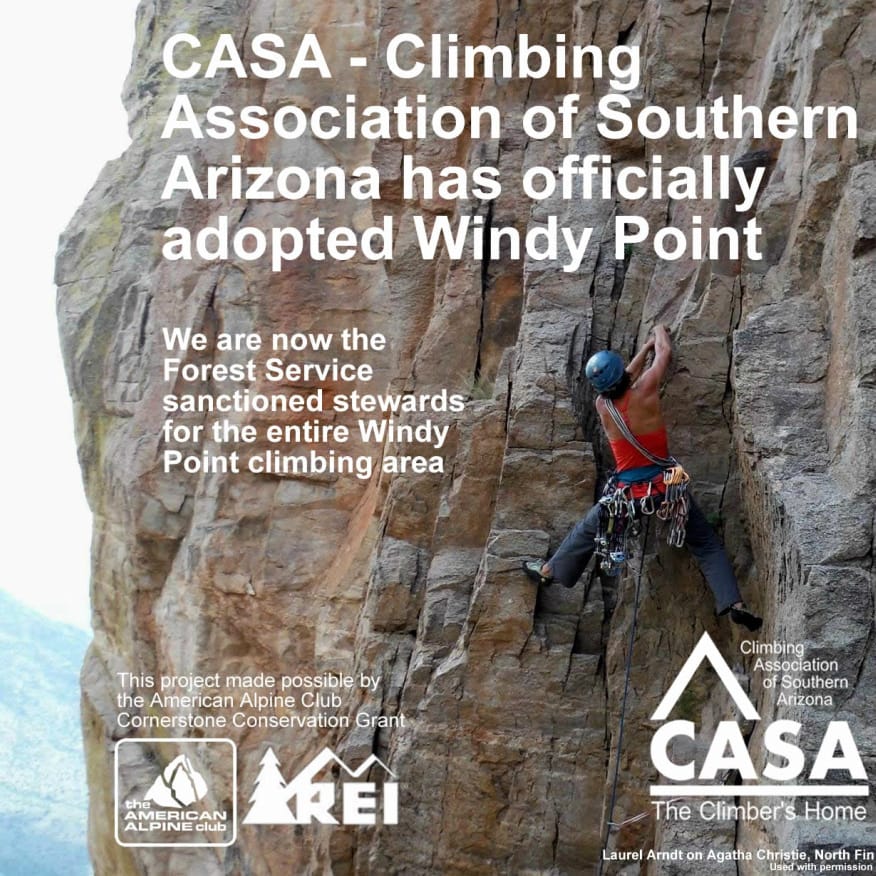 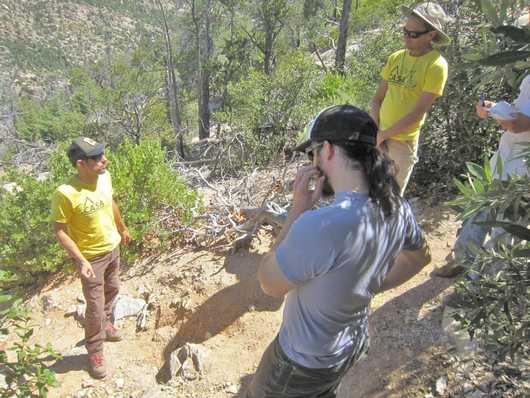 
On June 15, CASA conducted an 8-hour training for our volunteer Crew Leaders. The group learned leadership, risk management, and technical erosion control skills. As part of their training, they built upon the work that was started in February on the access route to North and South Fin at Windy Point. They had a lot of fun! Currently CASA has 6 Crew Leaders who are available to lead technical stewardship projects. 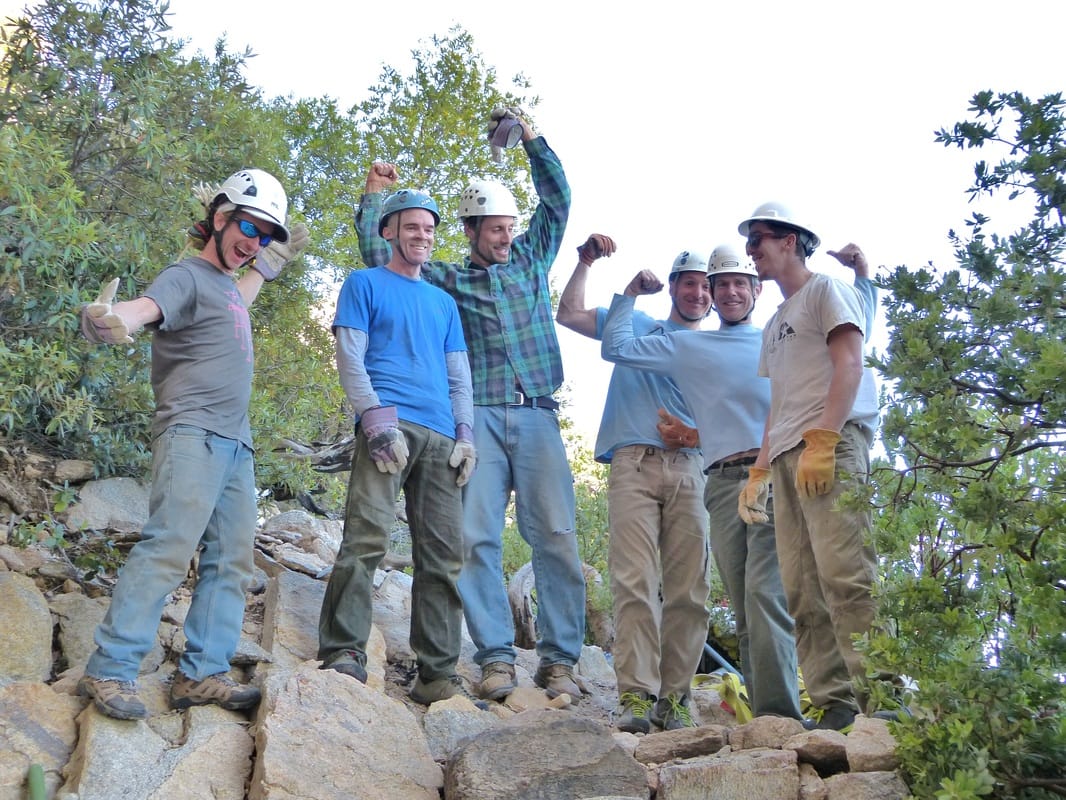 We now all have a climbing organization that's an official 501(c)(3) tax-exempt nonprofit. The IRS just approved CASA's application!

Now you can deduct your donations to CASA (and any that you already made to us). This also opens more doors for us to do good work giving back to the climbing community.

We're all reaping the benefits from getting our ducks in a row from the start! From our corporate filings to our bylaws to our structural policies, we've set out to do this right. Thank you to everyone who has contributed and supported our efforts! 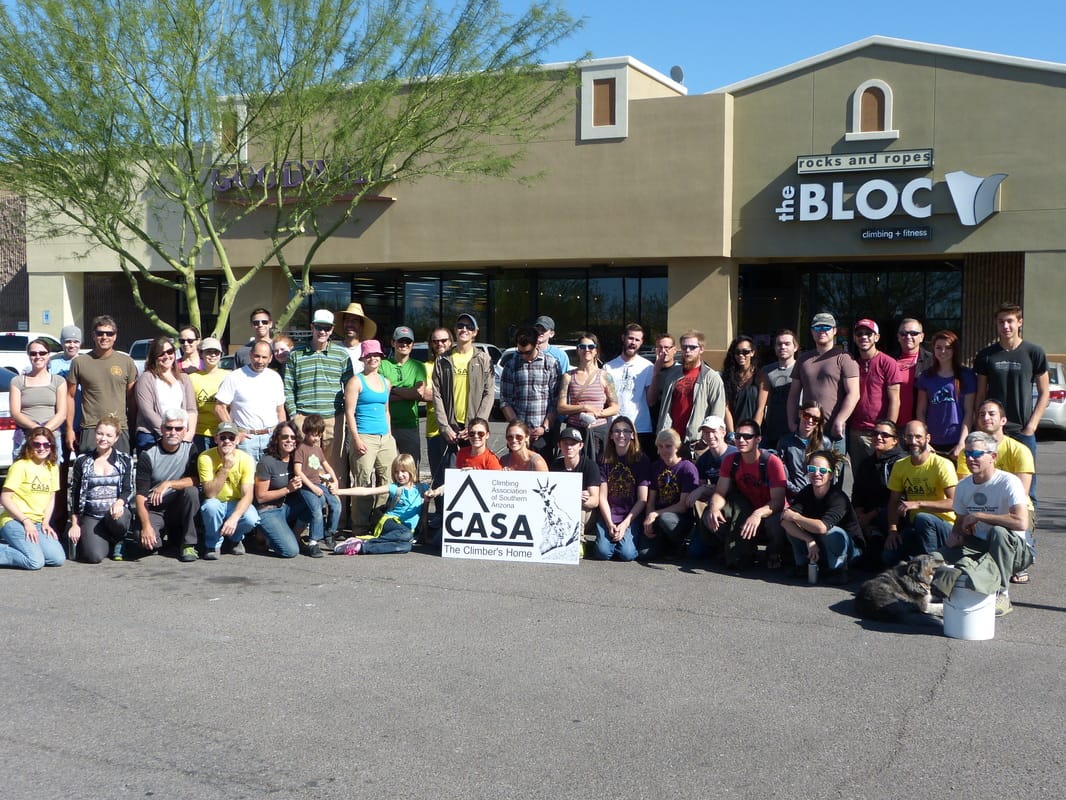 CASA Receives the 2015 Climbing Preservation Grant from the Access Fund 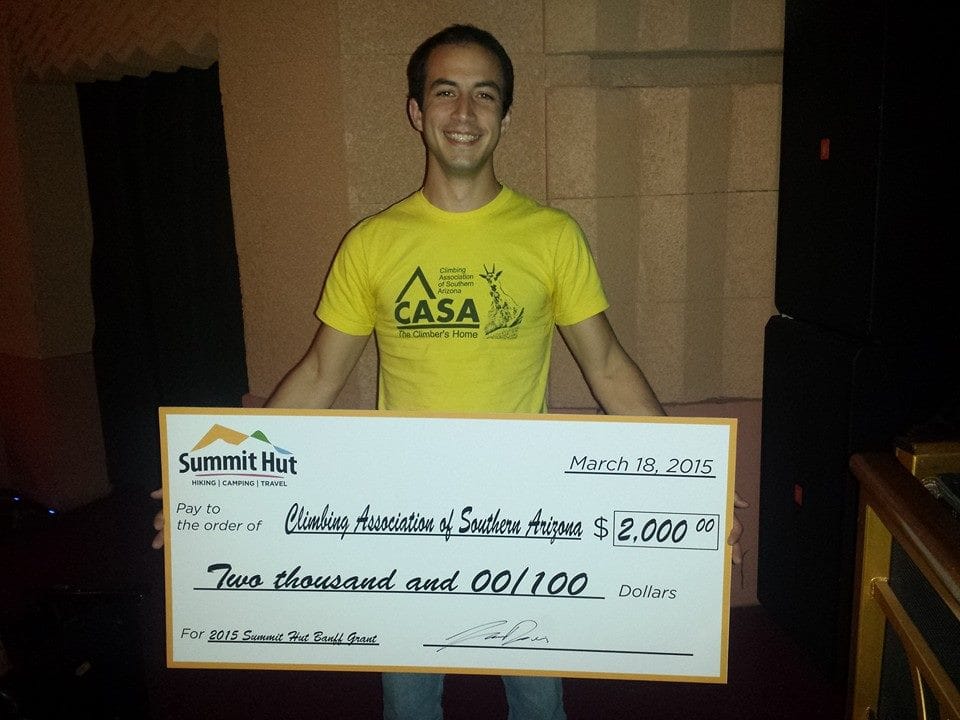 - If you must travel through burned areas please stay on established trails or routes, and walk on rocky areas where possible

- Read the forest and trail closure updates below